HS2 review and the impact on the North and Midlands

HS2 (High Speed 2) has been ten years in the making, but an independent review is looking into whether to scrap it, scale it back or rephase it, e.g. by starting works on Phase 2b from the North rather than the South.

Ten years ago, in 2009, the Government established HS2 Ltd to examine the case for a new high speed rail line to address the problem of overcapacity on the British rail network, particularly the West Coast Main Line.  The new line, known as High Speed 2, or HS2, was planned to be built in three stages. Phase 1 would be a line from London Euston to Birmingham; Phase 2a would extend this to Crewe; and Phase 2b would be a branch to Leeds via Toton (the eastern leg of a Y shape); and an extension of the western leg from Crewe to Manchester.  The idea was that the line would be state of the art and enable trains to run at speeds up to 250mph. 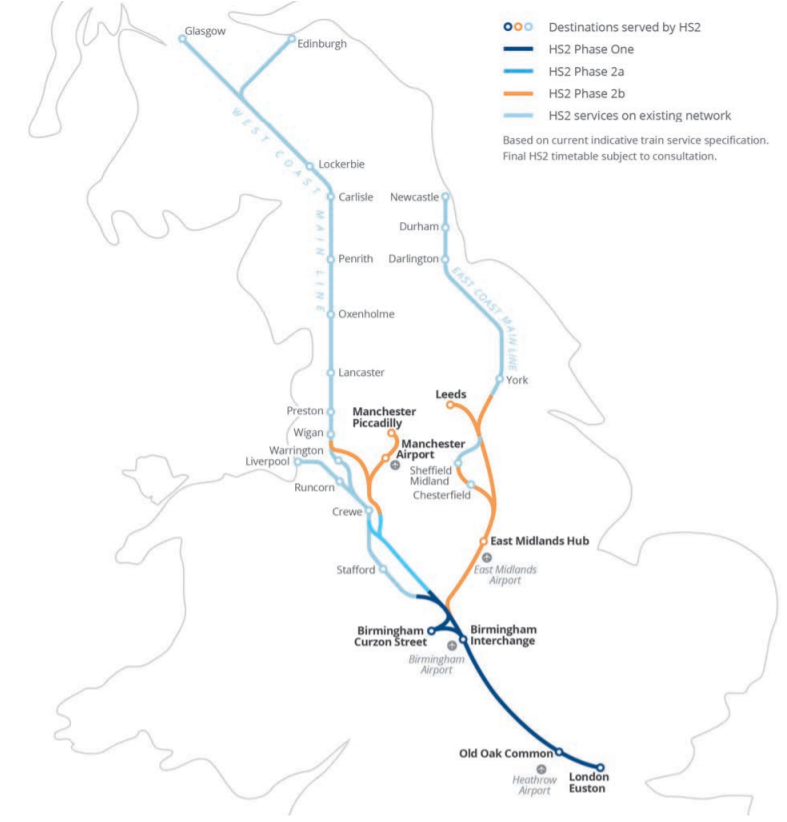 Each phase of the route has a separate hybrid bill that, once enacted, gives the Government the necessary powers to appropriate the land and build the line along that route. A hybrid bill is a special kind of parliamentary bill that has general application but significantly affects the interests of certain individuals and organisations. After it is introduced by the government to Parliament, but before its second reading, there is time for members of the public to comment on the environmental statement that is published alongside the bill.  Following second reading, the bill goes to a select committee to allow those affected to petition against aspects of the bill that they object to.  Once the select committee has reported back to Parliament, the bill continues through parliament in the normal way, then goes to the other House where the process is repeated.

For Phase 1, the High Speed Rail (London-West Midlands) Act 2017 was passed two years ago, giving the government statutory and planning authority to start constructing the scheme. A full business case, with an updated cost estimate, is currently expected later this year, which will inform the Notice to Proceed decision that will enable Phase 1 to move from design and development to the construction stage.

In anticipation of HS2, the DfT, advised by Addleshaw Goddard, have already let the West Coast Mainline franchise as a new West Coast Partnership with First Trenitalia which for the first time includes First Trenitalia acting as Shadow Operator for HS2, ensuring that high speed and regular train services are fully integrated on the network, to maximise use of capacity.

For Phase 2a, the High Speed Rail (West Midlands-Crewe) Bill is before Parliament.  It has passed the Commons stages, had its second reading in the House of Lords and is waiting to go to Select Committee to consider petitions.  It is currently expected to be passed by the end of 2019.

The bill for Phase 2b (to Manchester and Leeds) is currently planned to be introduced to Parliament next year.  The route has been confirmed and the government has consulted on a draft Environmental Statement, but there are further tweaks still ongoing to line up HS2 with Northern Powerhouse Rail (NPR): a consultation ran from June to September 2019 on 11 proposed design requirements.

Such a huge scheme has inevitably caused controversy. Unlike Brexit, HS2 has widespread support across all parties in Parliament, but like Brexit, has divided opinion amongst the general public.  Recently, issues have been raised around: whether the costs of HS2 will exceed the overall budget for the scheme, set at £55.7 billion; the timescales for delivering each stage; and whether the economic case for HS2 is convincing or the same outcome could be achieved by less ambitious schemes.

In light of this, when Grant Shapps became Transport Secretary in July 2019 he asked the new Chairman of HS2 Ltd, Allan Cook, to advise him on the cost and deliverability of the current HS2 scheme and a redacted version of this report was published on 3 September. Allan Cook believes that the current scheme design requires an increase in budget to around £88 billion (in today's prices) and the timescales for completing the various phases should be pushed back.  But he also thinks that the benefits that HS2 will bring have been undervalued – so even though it will cost more and take longer, it will bring more benefits than originally thought.

This led to the Government commissioning an independent review into whether and how to proceed with the HS2 project, headed up by Douglas Oakervee (a former head of HS2) with Lord (Tony) Berkeley (who is a critic of HS2) as deputy, supported by experts including Stephen Glaister, Sir Peter Hendy and John Cridland.  The review's terms of reference and timetable were published on 21 August.

The review will assemble and test all the existing evidence in order to allow the Prime Minister, the Secretary of State for Transport and the government to make properly-informed decisions on the future of Phases 1 and 2 of the project, including the estimated cost and schedule position. It is due to report back this autumn.

The review is tasked with examining, amongst other things:

It will also look at the costs and impact of cancelling HS2 altogether.

Implications for the North of England and the Midlands

HS2 is not just a high speed line running North-South from London.  As Allan Cook put it in his Stocktake, "it is an integral part of the plans of Transport for the North, Northern Powerhouse Rail (NPR) and Midlands Connect, providing 50% of the new lines needed by NPR. However, the scale and the complexity of the task, as well as the transformational benefits it will deliver for the country and its regions were under-estimated in the original business case."

Addleshaw Goddard is a member of Connecting Britain, a coalition of business and political leaders who have come together to make a positive case for why the North and the UK as a whole need HS2 and Northern Powerhouse Rail delivered together.  Allan Cook's Stocktake note that NPR cannot be built without HS2 lines coming into Leeds and Manchester and that much of the design work for NPR has been led by HS2.  Connecting Britain believes that HS2 Phase 2 developed in tandem with Northern Powerhouse Rail as one project is the only approach with the potential to deliver a transformation in connectivity and railway capacity throughout the North of England and that it is not an ‘either, or’ proposition.

On Wednesday 16 October Addleshaw Goddard hosted a panel event which marked the launch of a report by the Northern Powerhouse Partnership into HS2.  The report recommends the establishment of HS2 North, a special purpose vehicle that will work with the private sector to integrate HS2 and NPR, on the Olympic Delivery Authority model.

The launch event stressed the benefits of HS2 that have been ignored in its viability analysis and that HS2 North should be used as a means of ensuring the benefits underpinning the business case are delivered.  The message was that HS2 should not be looked at in terms of what it can deliver now, but how it can transform (and rebalance) the economy in future, looking to the 'Fourth Industrial Revolution' that is starting to take place. This is infrastructure that will last for the next 150 years.

The regions have been planning for HS2 for years now and are already seeing regeneration in anticipation of either faster services through HS2 stations; or more local services, for areas without an HS2 station but where HS2 will free up capacity on the network.

If the review decides to can HS2, there is a risk that all this will stop. It is more likely that HS2 will continue, but in a different form: maybe the western leg will be built but not the eastern leg to Leeds. Maybe a way will be found to build NPR first then extend HS2 south to London.

Losing HS2, or even just the eastern leg, would be a big blow to the North.  There is a productivity gap of 25% between the North and the rest of the UK.  Economic modelling by the Northern Powerhouse Independent Economic Review shows the economic potential to generate an additional £1,000 billion GVA between 2035 and 2050, if constraints to growth are removed.  Rail transport is the main constraint preventing the "agglomeration effect", where businesses can recruit labour from a wider geographic pool.  If transport investment unlocks just 10% of this it would enable £100 billion.  HS2 and NPR together play a vital part in driving that growth.

PR23: In The Midst of Unknowns, The Show Must Go On