After Brexit stalled attempts to introduce competition into GB's onshore electricity networks, it looks like it's finally going to happen.

CATOs (competitively appointed transmission owners) have been on the cards for over five years now. We wrote a number of articles following developments;

After this flurry of activity in 2016, CATOs were put on the back burner as legislation needed to be passed to implement them and Brexit (and then COVID-19) took up all Parliamentary time. So finally, five years later, it looks like they are back on with the latest consultation from BEIS.

THE NEED FOR CATOS IS GREATER THAN EVER

The net zero 2050 target means doubling our electricity demand by 2050, which means more electricity network infrastructure (or other ways of managing demand) is needed. The regulated networks, which own the wires, are constrained by their price controls. So opening up electricity network ownership and operation to third parties will enable new, innovative parties, with access to different sources of capital, to invest in network infrastructure.

The overall policy for onshore competition remains the same. Network planning processes identify a constraint (either an excess of supply or an excess of demand which needs a network solution). If the proposed solution meets certain criteria (new, separable and high value, for late competition), a competition is run to determine the winning bidder. That bidder then builds, owns and operates their network solution that addresses the constraint.

THERE ARE THREE HIGH LEVEL POLICY UPDATES SINCE THE 2016 PROPOSALS:

The Secretary of State will appoint a body to run the tenders. He or she could appoint one or more bodies to run different types of tenders. The Appointed Body could be Ofgem or someone else, although the only other suitable body is NGESO (or its successor FSO: see our article Future  System Operator Consultation).

There are two types of competition: early stage and late stage. The difference is the stage at which the constraint is put out for tender. In early stage competition, the tender is for the design, construction and delivery of the project. Ofgem is consulting separately on the details of this.

In late stage competition, the tender is done after design and planning consents have been secured, so the tender is for the construction and delivery of a project, so more like the established PPP model.

Ofgem will determine the choice of route in light of the circumstances.

The solution to a constraint may not be to build new wires. There could be other, more cost-effective ways of addressing it. The best way to illustrate this is by giving an example (taken from the consultation).

A constraint on the electricity transmission network. There are high levels of renewable generation in a particular location, but limited demand due to lower population density.

Detailed Tender Regulations and Invitation to Tender documentation will set out the process by which these different types of solutions are compared within a tender process. The consultation asks what should be the key factors to consider when assessing bids and whether there are any market barriers to smart, flexible solutions being competed alongside traditional ones.

Initially CATOs were only going to be for transmission level projects. But increases in the numbers of non-network solutions and non-traditional assets being integrated across the networks, and the capability of distribution and transmission networks to support one another, means that Ofgem now requires network companies to coordinate their actions and consider whole system solutions, via their licence conditions. The Electricity and Gas (Internal Markets) (No. 2) Regulations 2020 means DNOs also have to procure flexibility where this is a cost-effective alternative to network build.

The consultation sets out a proposed legislative framework for competition at the distribution level that is intended to complement and build on this policy area. Again, there is early and late competition.

Early competition requires that the tender evaluation criteria will be sector agnostic, i.e. the successful solution to address a constraint on the system could be from either the transmission or the distribution sector, or a non-network solution (e.g. storage). For example, a bidder might propose that a number of demand-side response technologies could be applied on the distribution network, to accommodate a generation shortage at transmission level. See Ofgem's separate  consultation on the early model competition.

For late model competition, the criteria are the same as for transmission: new, separate and high value (£100 million).

There is however a question mark over who should be the appointed body for distribution level projects: the DNO/DSO or OFGEM. 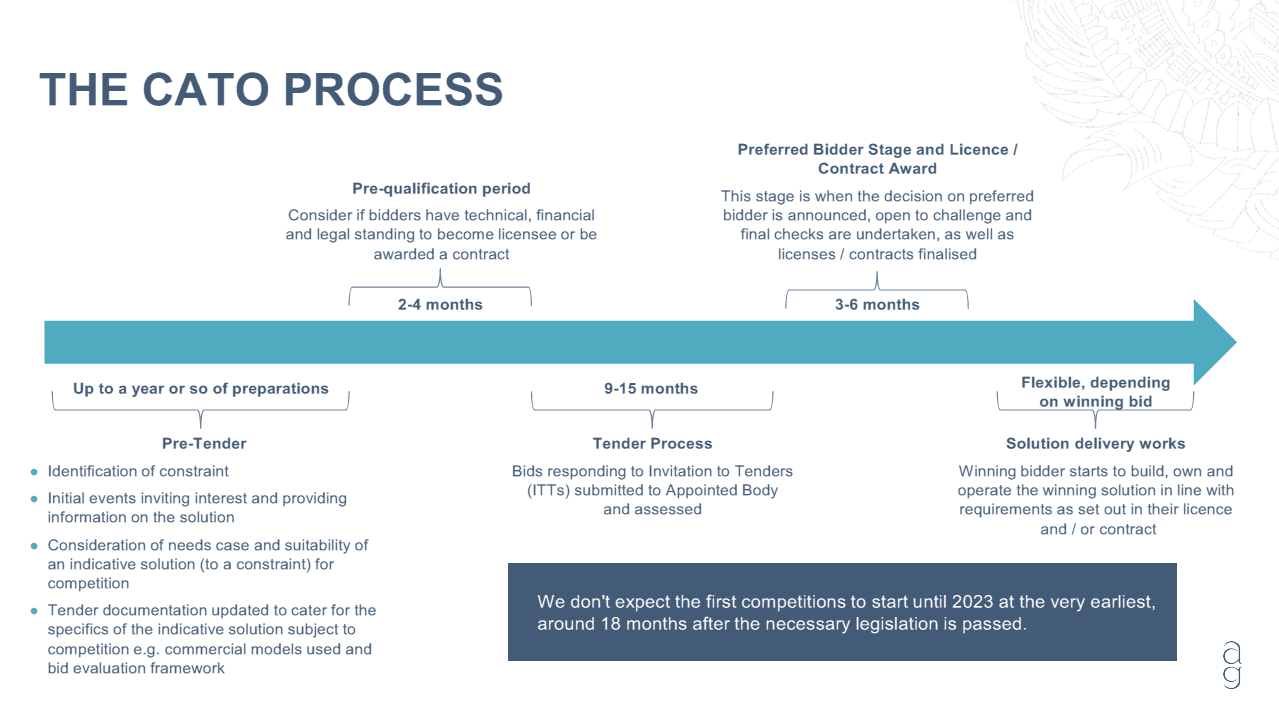 COMPARISON WITH THE WATER MODEL

We've reported before on how the water and energy competition models are similar. This was when CATOs were stalled and Ofgem had put forward an alternative SPV model. See The SPV Model and DPC: how do they compare? CATOs and the water equivalent, DPC (Direct Procurement for Customers), are also similar in some ways, but different in others.

Both regulators have reached the same conclusion that competitive tendering of new, separable assets is the way to increase efficiency.

The Early and Late (and potentially even Very Late) tender models in energy are similar to the water ones (Early, Late, Very Late and Split) – see https://www.ofwat.gov.uk/wp-content/uploads/2020/02/DPC-ConAppendix-2DPC-Briefing-Note.pdf%20page%2010.

DPC does not require legislative changes to implement.

The procuring body for DPC is the relevant water company, not a separate Appointed Body.

The CATO regime envisages a licence or a contract being awarded to the winning bidder. DPC just involves a contract awarded by the existing licence holder.

CATOs have been a long time coming and hopefully this consultation will lead to legislation this time. With less than 30 years to decarbonise our economy, having a range of solutions to grid constraints is becoming more time critical. 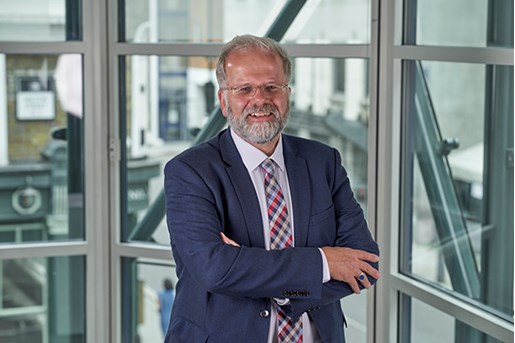