Hydrogen: Is it about to take off?

The UK's Government's ambitious target of net zero carbon emissions by 2050 will involve a step change in the way we produce and consume energy – a bigger change even than the recent lockdown measures to combat the spread of coronavirus.  Whilst electricity generation has managed to decarbonise significantly, industrial processes, transport and heat are nowhere near.  So government and industry are looking at potentially radical solutions.  Could hydrogen be the answer?

It has been a year since the net zero target was enacted into law, but the latest progress report from the Committee on Climate Change (CCC) shows that the UK is still far off from meeting this on current trajectories. 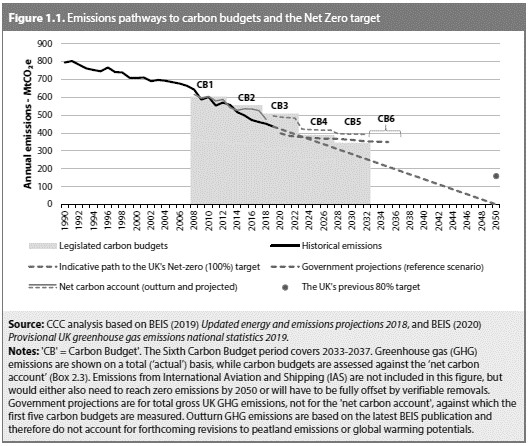 The CCC recommends developing a hydrogen economy as part of the solution. By 2050, UK hydrogen production capability needs to be comparable to the current fleet of gas-fired power stations. Hydrogen can be used:

We look at each of these applications in more detail below.

There are two main ways of producing hydrogen at scale at the moment. The cheapest (and most viable in the medium term) is Steam Methane Reforming, or SMR, of natural gas. This is often referred to as "blue hydrogen".  Converting natural gas to hydrogen using SMR produces carbon dioxide, so it ends up increasing overall CO2 emissions.  To make it low-carbon, it needs to be combined with carbon capture, use and storage (CCUS).  The CCUS industry in Britain has yet to get off the ground, not helped by the Government's sudden withdrawal of funding for the CCUS commercialisation competition in November 2015, but introducing large-scale hydrogen production for heating should make investors more confident to invest in CCUS technology. The Government has made encouraging noises in this direction, such as the CCUS Action Plan in 2018 and the consultation on CCUS business models (which we reported on in our article, Net Zero Needs the Nuclear Option), but so far we have not seen any definite policy emerging.

The second main way of producing hydrogen is by electrolysis of water, which converts electricity to hydrogen. This is often known as "green hydrogen" as it has no environmental impact if generated from renewable energy sources. At the moment it is much more expensive to produce than doing so using SMR (even with CCUS) and requires more energy, but it produces very pure hydrogen which when combusted releases only steam.  It is also more small-scale than SMR but can have a use to convert and store as hydrogen excess power generated by renewable installations, and to power low emission vehicles – more on this below.

We are likely to see blue hydrogen being produced in the medium term and green hydrogen in the longer term, as the cost of the technology becomes cheaper and there is more renewable energy available.

The 'Surf 'n' Turf' project in Orkney is a good example, where surplus electricity generated by tidal power and an onshore wind turbine is converted to hydrogen by a 500kW electrolyser.  The hydrogen is stored as compressed gas then transported on a trailer by road and sea to Kirkwall, where it powers a fuel cell to generate clean electricity on demand.  This is being extended using European funding so that the hydrogen will also be used to refuel a fleet of ten vans and two hydrogen-powered boilers to provide zero carbon heat.

Hydrogen for heat and industrial processes

The number of hydrogen projects that have received Network Innovation Allowance (NIA) and Network Innovation Competition (NIC) funding shows that hydrogen is starting to be taken seriously by the power industry as a decarbonisation option.  The oil and gas industry are also turning to hydrogen: one in five senior oil and gas professionals surveyed by DNV GL said that their organisation is already actively entering the hydrogen market .  There are various projects looking at how hydrogen could either be blended with, or entirely replace, natural gas in the GB gas network.

Perhaps the most high-profile, or at least the most ambitious, project is H21 Leeds Citygate, a proposal to convert the entire city of Leeds to 100% hydrogen, fuelled by four SMR reactors on Teesside and with CCUS and excess hydrogen storage in salt caverns under the North Sea.  Led by Northern Gas Networks (NGN), the project study in 2016 concluded that "converting the UK's gas network to hydrogen is technically possible and economically viable" and that it would lead to a 73% reduction in CO2 emissions from heat but also from transport and power generation.

H21 is now focused on delivering two key pieces of work, enabling a first policy decision on hydrogen to be made.

The H21 programme, launched in 2016, began the discussion around hydrogen for heat. Since then, several gas industry projects have evolved to demonstrate the benefits of such an energy transition, most significantly Hy4Heat, the £25 million UK Government programme exploring hydrogen’s use ‘downstream of the meter’ in appliances and buildings. 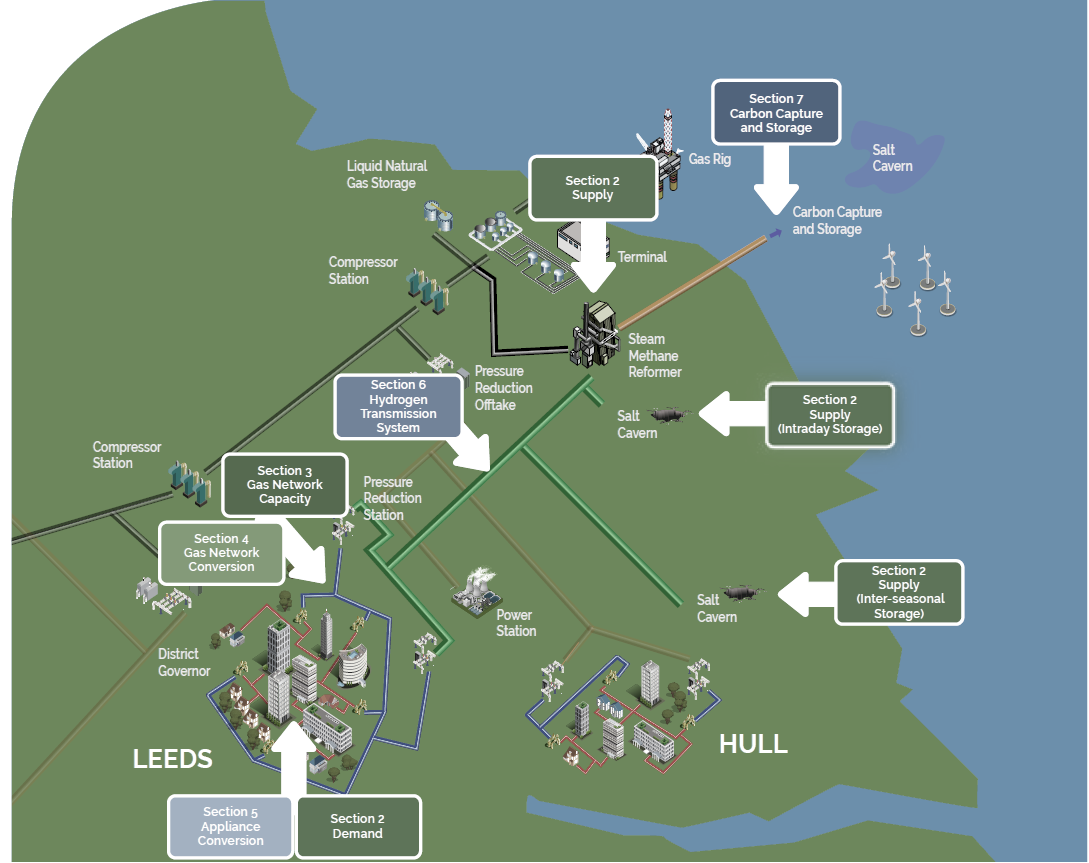 Other current projects include:

There are also various industrial clusters developing, which are looking to decarbonise industry using hydrogen and/or CCUS. These include Zero Carbon Humber, which aims to be the UK's first zero carbon cluster and decarbonise the North of England and the HyNet hydrogen energy and CCUS project in the North West of England.

Surface transport accounted for 24% of the UK's carbon emissions in 2019 and despite the recent fall due to COVID-19, emissions are on the rise again.  Air pollution is also in the news, with NOx emissions from diesel cars being a particular issue.  Electric vehicles have been lauded as the solution, and the Government has banned the sale of petrol and diesel cars after 2040 and is consulting on moving this forward to 2035 and including hybrids in the ban.  The recent consultation on a Transport Decarbonisation Plan (which we reported on in our Trends in Transport article, Is it time to reappraise how we travel?) looks at the demand side, but there will still be a need for some vehicles, particularly heavy ones such as buses, HGVs and trains.

The problem with heavy vehicles is that they need large batteries to power them, and those batteries are themselves heavy. There is also the time it takes to recharge them. Hydrogen fuel cell electric vehicles (FCEVs) can be refuelled in around five minutes using a pump like a conventional petrol or diesel car and have a range of around 300 miles and have zero emissions.  The real opportunity for growth of FCEVs is in freight and public transport, where the weight of them is too great for electric battery power alone.

The Government has issued various innovation funding competitions including its First of a Kind competition, now in its fourth year. Winners of the latest round included the HydroFLEX power pack design for hydrogen trains and Steamology Motion's hydrogen-based steam turbine system for existing rail freight locomotives.

Several bus manufacturers, such as Wrightbus, are producing hydrogen buses and the Transport Secretary Grant Shapps recently hinted at the first all-hydrogen bus town, following on from the first all-electric bus town announced in February 2020.

The problem with hydrogen-powered transport at the moment is the lack of fuelling infrastructure. Should the natural gas network be converted to hydrogen, then this would enable a network of hydrogen refuelling stations to be built, connected to the hydrogen gas network, allowing the power and fuel network to work together.

Hydrogen is very versatile as it can be transported as a gas by pipeline, by road in tankers as a compressed gas, or be produced locally in a decentralised system.  This means it has many potential uses in an overall energy system.

Replacing natural gas with hydrogen seems a radical option, but maybe not that radical when compared with other future scenarios that envisage a wholesale conversion to electricity and decommissioning of the gas grid (see KPMG's 2050 Energy Scenarios).  National Grid's Future Energy Scenarios 2019 envisage up to 312TWh annual hydrogen demand by 2050. It will only enable us to meet our carbon reduction commitments if the hydrogen is produced in a low-carbon way.  This means using renewable electricity to power electrolysers, or using SMR coupled with CCUS.  If there is a need to produce hydrogen at scale then this could be a real boost to the CCUS industry as it would become a safer bet for investors.

In reality, without a very clear policy direction and mandate from Government, hydrogen is likely to develop as part of a portfolio of low-carbon energy options.   Freight and passenger transport companies may well use hydrogen to power their fleets, and could produce that hydrogen on-site, and there could be a number of stand-alone hydrogen networks.

Rather than a wholesale replacement of natural gas with hydrogen, which would necessitate replacing all appliances, we could see regulations being relaxed allowing an increased proportion of hydrogen to be injected into the gas network, although this is probably not a long term solution to reducing carbon emissions, and brings its own problems of how to meter this, given that the energy content of hydrogen is lower than that of natural gas.

What is clear is that the energy industry are taking hydrogen seriously and it is now up to the Government to introduce the policies needed to encourage its wider adoption.

Building Back Better with a Green Recovery – The Insight Series