The City's Future in the Balance?

A referendum on the UK’s membership of the EU will take place within the next two years. Apart from a significant re-shaping of the political landscape, a Brexit is likely to have a substantial impact on the economy in general, and is likely to affect the financial services sector the most.

This report considers the business implications of a Brexit in particular for the financial services sector.

Industry opinions of a Brexit

The survey which was run in conjunction with an event; "Brexit – The City's Future in the Balance?" found that the majority of people (71%) thought the referendum should, be held in 2017 rather than in 2016 to give time to negotiate meaningful concessions and in order to avoid longer periods of uncertainty.

17% said they believed leaving the EU would be highly prejudicial to the financial services sector and that we should remain in at all costs. Yet 16%, believed that the sector would not be damaged and the UK would continue to flourish outside the EU.

Respondents believed that the areas of financial services most likely to be impacted by a full Brexit were;

Naturally, the particular form that Brexit may take will determine how it affects UK financial services. As an alternative to EU membership, respondents to the Brexit survey broadly favoured a Norway-like status, with membership of the European Economic Area (EEA) allowing continued access to the EU market, but without any material influence over the relevant regulations.

While thoughts on the preferred outcome in the event of a Brexit were split, 64% of respondents favoured continued membership with the caveat that the UK needs concessions to protect it from an increasingly unfriendly drift in the EU regulation in the form of banker cap bonuses, transaction taxes etc.

Of course what our relationship with the EU would look like after a Brexit is unchartered territory and it may be that we would be able to negotiate an arrangement which doesn't look like any existing model. 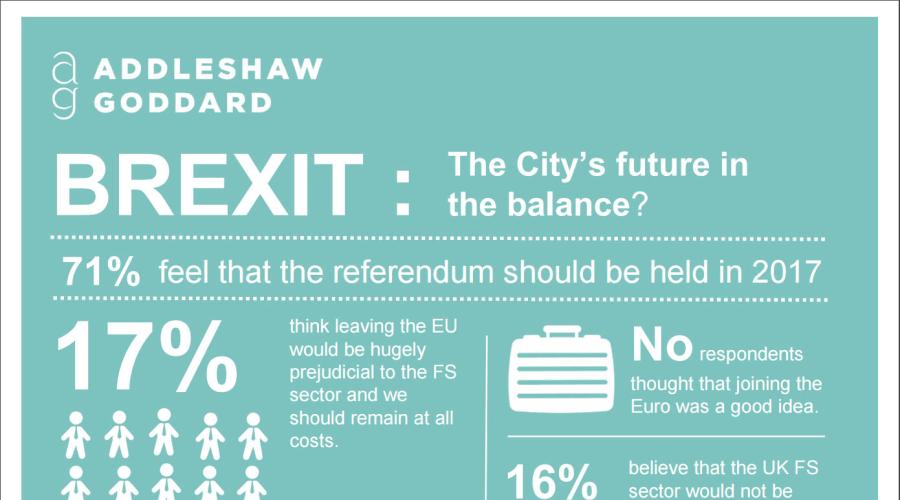 We asked the audience at our event how a Brexit would affect the Financial Services sector. View our inforgraphic to see top challenges and opportunities our audience believe the sector will face.

FCA consults on changes to its approach to payment services