In the event of a no-deal Brexit, then the UK will revert to trading on the World Trade Organisation (WTO) rules until new arrangements have been implemented.

Under these rules, there are significant differences from the UK's current position as a member of the single market and customs union in relation to goods and many service sectors.

The WTO consists of the:

Key principles of the WTO include the:

What do WTO rules mean for goods?

If no deal is agreed between the UK and EU, then MFN tariff rates (import on taxes of goods) will apply to trade between the UK and the EU, as well as any other country with which the EU has a FTA in place. This will take affect from 23h on the 29 March 2019.

Every WTO member has its own WTO schedules, a list of MFN tariff rates and quota that it applies to other countries equally. These are annexed to the GATT.

The UK is already a full member of the WTO in its own right, so will not have to re-join after Brexit, however it will need to agree a new list of schedules for tariffs on goods. The UK has submitted documents to the WTO, stating it wants to make some technical changes to its existing commitments as an EU member but otherwise leave them unchanged. 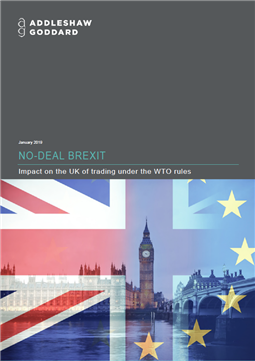