At the end of November 2021 Sir Peter Hendy published the final report of his Union Connectivity Review, examining the key road, rail, sea and air links between the four UK nations, and recommending how to improve them.

Addleshaw Goddard were the only law firm to feed into the review.

We reported on the Interim Report back in March 2021 – see our article A Strategic Transport Network for the UK. The Final Report builds on those recommendations.

The key recommendation, as also set out in the Interim Report, is for a strategic transport network for the whole UK, known as UKNET. This is to replace the Trans-European Network (TEN-T) supported by the EU, which the UK was a part of. But according to the Final Report, the UK financially contributed more to TEN-T than it received out of it; and the key elements of the UK's transport infrastructure that were supported by TEN-T were chosen with a view to pan-European connectivity rather than the UK's requirements.

The Report recommends that the UK Government designs and implements UKNET and commits to providing additional funding to improve the network, in particular the parts that are not performing well.

Transport connections should be part of UKNET if they meet one or more of these criteria:

This is a map of UKNET taken from the Final Report: 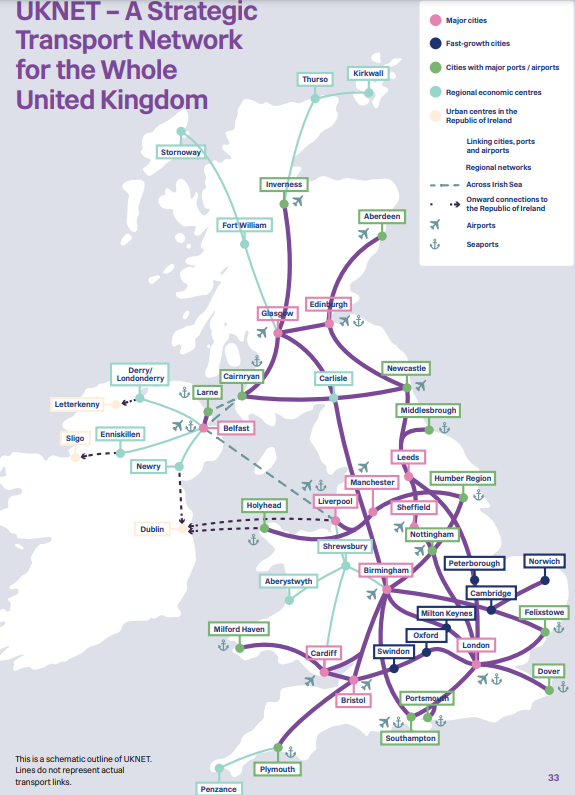 The point of UKNET is to have a network to make transport investment into on a pan-UK basis. It would allow transport appraisals for schemes on the network to be made on a UK-wide basis, with all costs and benefits being fully accounted for. This would limit the risk of cross-border schemes being deprioritised. 100% of respondents to the review in Scotland, Wales and Northern Ireland were in favour of UKNET's development.

The Report then breaks the UKNET down into what it calls key transport network corridors: multi-modal corridors connecting key strategic points within the UK. They include: the West Coast and East Coast Main Lines and the parallel major roads, the M6 and A1 respectively; the North Channel corridor connecting the A75 in Scotland with ferries to Northern Ireland; the South Wales corridor along the M4 route; and the Welsh Marches corridor connecting North and South Wales via England (did you know that 75% of Welsh inter-regional journeys on a given weekday are cross-border with England?)

The Report makes various recommendations for improvements along these corridors, including more funding, working with the devolved administrations and carrying out multi-modal assessments.

Domestic air travel and the risk of carbon contradiction

The Report recognises that reducing rail journey times will mean more people choose to travel by train than to fly, as this graph shows: 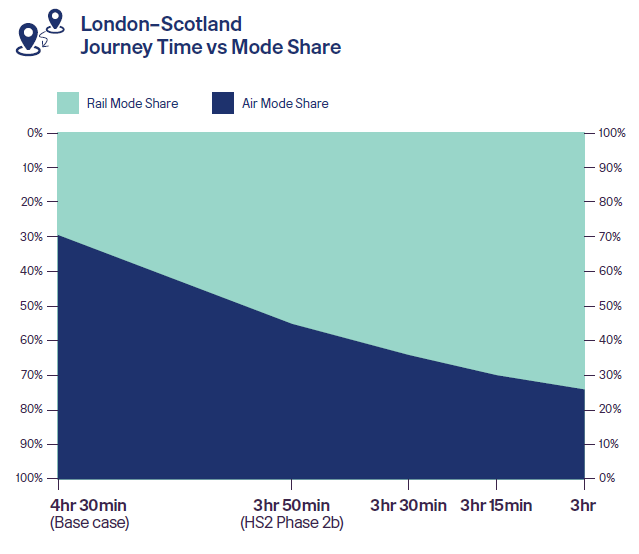 But it also recognises that domestic aviation is sometimes the only option where journeys are too long to be reasonably taken by road or rail and identifies airports and support for aviation connections to northern regions in Scotland and Northern Ireland as essential Recommendations include changing the 'public service obligation' (PSO) subsidies so that they don’t just apply to routes to and from London exclusively operated by one airline. This won't affect Scotland, which can, and already does, support PSO routes that are wholly within Scotland, but would affect the other nation and links between Scotland and the other nations.

Another recommendation, which some argue flies in the face of the UK's net zero decarbonisation commitment, is to reduce the rate of domestic air passenger duty (APD), which the Government pledged to do in the 2021 Autumn Budget. The rationale, that the Chancellor has described as "pro-union", is that APD disproportionately impacts intra-UK travel compared with international travel, as APD is paid on both outbound and inbound legs of travel within the UK, whereas travel abroad only incurs APD on the outbound. It also has a disproportionate effect on connectivity to Northern Ireland, where people simply cross the border and fly from Dublin, which does not impose APD. The Report also points out that APD is not an environmental tax as there is no link to carbon emissions or to the efficiency of an aircraft. Replacing APD with a per plane tax based on an aircraft's emissions has been looked at before but found to be 'legally difficult'.

The Report encourages prioritising more domestic flights over international flights and recommends that the Government intervene in the assignment of slots at London airports to provide more slots for domestic flights where there is not a viable road or rail alternative.

As a sop to the carbon conundrum, the Report does make some recommendations around sustainable fuels, but this really just reiterates existing commitments, apart from suggesting that there should be a sustainable aviation fuel plant in Northern Ireland.  The Report mentions the long term aims of the FlyZero project which is developing zero-emission passenger carrying, but there is no mention of the immediate opportunity to reduce aviation emissions and increase efficiency on some short haul domestic cargo and medical supply flights through the deployment of unmanned aircraft (drones), which is already underway and on the aviation policy agenda but requires support.

There was always going to be a dichotomy between the Union Connectivity Review's UK-wide focus and the fact that transport infrastructure is a devolved matter, so the responsibility of each devolved nation. The Scottish Government in particular sees the Report as politically motivated. Not helped by figures such as '7 in 10 people in Scotland who travelled to other nations of the UK once a month or more in 2019 were more favourable towards the Union than those who did so less regularly (5 in 10)'. The implication being that improving transport links will lessen the desire for Scottish independence. So, given the Scottish Government's refusal to participate in the Review, we will have to wait and see how many of the recommendations, that rely on the devolved administrations working with Westminster, will actually be put into practice.

There are some really good suggestions in the Final Report, such as taking a multi-modal approach to transport infrastructure, recognising the key role of freight, improving rail connections to seaports and gathering data on a UK wide basis rather than looking at each country in isolation. But whether these will come to fruition depends on co-operation between the nations and this may be hard to achieve.