In a landmark decision, the English High Court allows the recovery of the costs of third party funding in addition to the award of legal costs and damages.

Whilst not a new issue, and indeed an issue explored at length by commentators and a number of the arbitral institutions, this decision propels into the spotlight the question increasingly being asked of arbitrators in often private and confidential proceedings, to award the cost of funding as well as the legal costs themselves.

As discussed below, it is a decision that may embolden arbitrators faced with similar circumstances and similar arbitration agreements/rules. It will certainly encourage more parties to reach for the support of a funder when the cost of arbitration proceedings is overwhelming. It may also encourage parties to use funding for reasons other than necessity – such as where a party does not want the cost or risk of the proceedings on its balance sheet, or where a party wants to use the adverse cost risk as a tactical ploy (in a similar way to the manner in which Conditional Fee Arrangements were often used prior to Lord Justice Jackson's reforms).

The judgment is good news therefore for funders and those with claims to pursue, but insufficient funds. On the flip side, the judgment is potentially extremely painful for the losing party. This leads us to question, does the decision open up the floodgates for recovery of third party funding costs in arbitration in a manner akin to the position of claimants in the English courts with condition fee agreements and ATE policies prior to 1 April 2013? Probably not, or at least not yet.

For more information, read the full article in PDF. 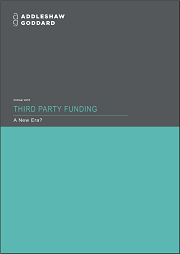 For over a decade, litigation finance is a field we’ve made our own, equipping companies with the funds to protect their interests and free their balance sheets.