PR23: In The Midst of Unknowns, The Show Must Go On

Does the Williams-Shapps Plan for Rail mean the end to periodic reviews? It appears not.

It's hard to believe it's that time already: time to think about Network Rail's funding requirements in Control Period 7 (CP7) starting in April 2024. To help work through the key points for consideration and related issues amidst the voluminous documentation issued at a prodigious rate by ORR, we reported on the last periodic review, PR18, in this series of articles and we will do the same again for this latest periodic review, known as PR23.

The context is a bit different this time round. We've finally had the Williams-Shapps Plan for Rail (see our five-point summary) so we know that a new body, Great British Railways, will be taking over timetabling, setting fares, owning and managing stations and infrastructure, track access, and procuring most passenger services through new concession contracts. Network Rail will be subsumed into this new body. The Government is setting up a new Rail Transformation Programme to develop a new rules-based access system for Great British Railways along with new access contracts. But this will take time to implement. So the ORR will use PR23 to regulate Network Rail for now, but once Great British Railways takes over, it will be held to account – we're not yet sure how - for delivering the commitments that Network Rail enters into.

What the periodic review does

Going back a step, the periodic review process sets the level of funding that Network Rail (or in future, Great British Railways) should receive for operating, maintaining and renewing the GB rail infrastructure and what outputs it needs to deliver in return. The funding comes partly from government (the Statement of Funds Available, or SoFA) and partly from track access charges and performance incentives, which are set out in the track access contracts that train operators sign with Network Rail (with the ORR's approval). Setting the level of those charges and incentives for the next five-year Control Period is a key part of the periodic review process.

The outputs that Network Rail has to deliver are set out in the High Level Output Specifications (HLOS) that the English and Scottish governments set. Network Rail develops detailed business plans for how it will deliver these outputs; the ORR scrutinises these then makes a final determination about how to allocate the funding between Network Rail's business units and the outputs they must deliver. The ORR then holds Network Rail to account, through its licence conditions, for delivering those outputs. For more detail on this, see Holding Network Rail to account.

Periodic Reviews and the Williams-Shapps Plan for Rail

But isn't all this superseded by the Williams-Shapps Plan for Rail (WSP)? It appears not. The WSP recognises the importance of five year funding settlements for infrastructure and states that the government will continue them during and following the implementation of the reforms. Following CP7, Great British Railways will develop five-year business plans across both services and infrastructure to inform government funding decisions and the level of operational subsidy. So it looks like periodic reviews, in one form or another, are here to stay. They will sit beneath a 30-year strategy that will set out key strategic priorities for the whole rail network over the long term.

Given that Great British Railways will be taking over from Network Rail at some point, but probably not before the start of CP7, the ORR is not proposing major changes for now. Its Open Letter launching PR23 sets out its approach. It will continue to set separate settlements for each region of Network Rail, plus a separate System Operator settlement and a specific focus on freight.

Three key themes will drive the ORR's approach to the PR23 framework and the charges and incentives framework:

1. Whole-industry approach – incentivising Network Rail to work with the rest of industry to deliver the best outcomes for passengers and users; supporting driving down costs across the industry as a whole (the WSP mentions £1.5bn a year may be achievable after 2026); and aligning with the 30-year strategy as this develops.

2. Adapting to change and uncertainty – the need for flexibility will be built into the ORR's considerations from the very outset of PR23, especially given the future changes to the access regime anticipated by the Williams-Shapps Plan for Rail. We don't yet know what that flexibility will look like, other than the CP7 settlement will not lock-in uncertain forecasts of passenger demands and revenues, which suggests some form of interim review may be on the cards.

3. Supporting effective integrated decision-making – helping the decisions of the UK and Scottish governments as funders by assessing the trade-offs and choices, given the financial challenges faced by the railway as a whole.

Schedule 8 of the track access contract sets out the delay attribution regime, designed to compensate train operators for the long-term revenue impacts of delays they did not cause. The WSP was scathing about this: "The cottage industry of costly commercial disputes over delay attribution will end". Instead, the intention is that new concession-style agreements replacing passenger franchise contracts will remove most or all of the risk associated with Schedule 8 payments. So why has the ORR launched a consultation on Schedule 8 reforms?

The answer is that, for now at least, Network Rail as the Infrastructure Manager is under a legal duty to have a train performance regime [1]. Any legislation resulting from the Williams-Shapps Plan that might change this requirement is unlikely to be in place by the time the ORR needs to take key decisions on Schedule 8 so that changes can be implemented for the start of CP7.

Even once such legislation is in place, the ORR is of the view that there is still a role for a mechanism like Schedule 8 to provide revenue protection to fully commercial services like freight and open access, plus it could help protect the Scottish and Welsh governments and other devolved railway authorities from revenue loss from disruptions caused by other parties over which they have no control.

So for now the ORR is proposing to keep Schedule 8 but with some incremental and proportionate changes. It will apply to any interim period before the WSP is fully implemented, and can provide a baseline performance regime that Great British Railways could adopt in future. The ORR is seeking views on whether to make these changes as part of PR23 or to leave them to be made through the Rail Transformation Programme.

The main changes the ORR could make are:

There are other changes the ORR is considering, but wants industry views before deciding whether to progress them:

The ORR website has an indicative timeline for the periodic review process, recognising that it may change as the implementation plan for the Williams-Shapps Plan becomes clearer. We'll report on each of the key stages as they happen. Look out for our next article, on the access charges consultation and the Schedule 4 consultation. 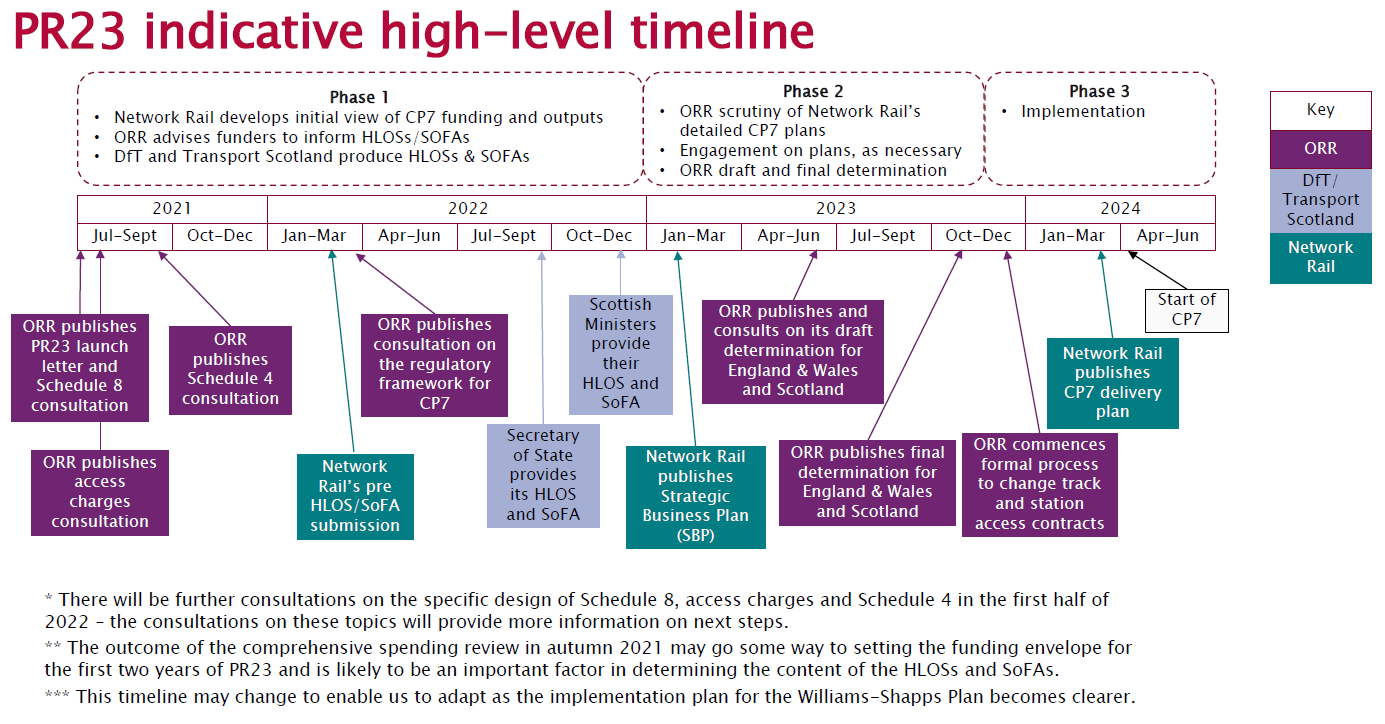 The rail industry is facing into a major reform programme - once in a generation or even lifetime in scale - but in the midst of that the show must go on. Whilst the Transformation team gears up and takes forward the various legal, policy and regulatory workstreams that flow from the WSP – not least the role of the access charge regime following the combination of Infrastructure Manager and specifier and procurer of rail passenger services into one body – we have to keep an eye on the knitting. It's one thing though to say that rail reform is happening over there whilst the ORR concentrates on CP7 outcomes – surely in practice this periodic review will ultimately be the forum in which many of the key issues are debated, challenged and refined and more than ever requires close attention. We certainly look forward to finding out.