The Levy Control Framework escaped a mention in the recent Summer Budget but has made up for it yesterday (22 July 2015).

Amber Rudd, Secretary of State for Energy and Climate Change, announced a package of reforms to rein in spending on renewable energy subsidies, namely: closing the Renewables Obligation (RO) to smaller-scale solar PV; removing pre-accreditation for the feed-in tariff (FIT); and withdrawing the grandfathering provisions for biomass plants and solar PV up to 5MW under the Renewables Obligation.

One of the aims of the policy change is to increase the speed at which grid parity – where renewable power no longer needs subsidies to compete – is reached. There is general consensus in the industry that solar systems (as an example) will be at grid parity within two years as the economics of solar continue to improve due to further reductions in panel costs and cost of capital, improved efficiencies, increases in electricity prices and better storage solutions. However, the policy changes create a void during the interim period which as an industry we must ensure does not drive away innovation and future opportunities for the UK market.

The Levy Control Framework (LCF) caps the total amount of subsidies that are available to support renewable energy technologies. These subsidies are paid for by a levy on consumers' energy bills – what David Cameron famously called the "green cr*p". By 2020, the limit on spending under the LCF was supposed to be £7.6 billion, but the current forecast of spending (based on commercial intelligence on potential renewables deployment, and DECC's modelling outputs drawing on latest projections of electricity demand and fossil fuel prices) in 2020 is £9.1 billion, as set out in the table below.

The reasons for this projected overspend include, we are told, technology improvements happening faster than expected, greater uptake of subsidised renewables (particularly solar PV and onshore wind) than anticipated, and lower electricity wholesale prices (meaning more subsidy is now expected to be paid under the Contract for Difference, which "tops up" the wholesale price to a guaranteed level).

To put a brake on this spending, the Government have issued two new consultations and announced the results of a third. These changes are detailed and so we have divided this briefing into sections according to the technologies affected.

Closing the RO to solar PV of 5MW and below

In a further blow to the solar industry (which is still coming to terms with the closure of the Renewables Obligation to solar PV stations above 5MW at the end of March 2015) the Government now proposes to close the RO to solar PV stations of 5MW or below from 1 April 2016. This is a particular blow to a number of developers who had resolved to re-size projects to still fit in the RO under the 5MW level. But, in case developers were thinking of challenging this, the consultation warns that "when the closure of the RO to large-scale solar PV was confirmed DECC made clear that we would continue to monitor the deployment pipeline of solar PV projects of 5MW and below, and consider taking measures if necessary." So in other words, you can't say we didn't warn you.

DECC estimate that deployment of new solar PV projects of 5MW and below is likely to be in the range of 800MW to 2GW (possibly even 3GW) each year in both 2015/16 and 2016/17 which would cost between £40 million and £100 million per year in RO support and would go above the LCF cap.

DECC also think that the commissioning costs have come down faster than they thought when setting the level of RO support, using the fact that three solar projects cleared the CfD auction at £79.23/MWh as evidence that some solar projects might be getting more subsidy than they needed – another reason for ending it early.

Grandfathering is a term used to mean that, once a generating station starts receiving RO support, the level of support it gets will not change for the 20 years of the RO scheme, i.e. the band you accredit at is the band you get for the duration. As mentioned above, DECC are aware that costs have fallen faster and further than anticipated. They are therefore proposing to remove grandfathering for new solar PV projects of 5MW and below (and additional capacity added to an accredited solar PV station up to 5MW in total), with effect from 22 July, the date of the consultation, unless they qualify for a grace period.

The only good news for developers is that for both of these (closure of the RO and removal of grandfathering) there will be a grace period. Whilst the availability of a grace period is of course very welcome, it is another grace period for developers to grapple with, although DECC say the criteria are equivalent to those offered when the RO was closed to new solar above 5MW.

New solar PV projects of 5MW or below (or projects wanting to add additional capacity) can still enter the RO after 31 March 2016 up to 31 March 2017 when the scheme closes to all, if they meet one of the following criteria:

2. They can give evidence that they have made "significant financial commitments" on or before 22 July 2015. The requirements for these may seem fairly familiar:

3. There has been a grid connection delay.

Projects that can show evidence of point 2 above (the significant financial commitments) will also be exempt from the removal of grandfathering, so will continue to receive the level of support that applies at the date of their accreditation, for the lifetime of the scheme. If, however, a project only qualifies for a grace period under criterion 1 or 3 it would seem that the removal of grandfathering would still apply.

None of the above measures affects the changes already introduced for solar projects with an installed capacity greater than 5MW.

But even if a project can take advantage of a grace period and still get RO support, it may be at a lower level than anticipated (unless their support is grandfathered). DECC are also carrying out a banding review, which they are entitled to do if the costs of generating electricity are significantly different from the costs to which DECC had regard in originally setting the banding. As mentioned above, DECC believe the costs have come down further than anticipated and has commissioned an independent study to look at this. Once it has had chance to review this consultation, which closes on 2 September, DECC will then publish proposed bandings for further consultation, so watch this space.

Removal of pre-accreditation for FIT

Solar PV and onshore wind projects above 50kW, and all hydro and anaerobic digestion (AD) projects have until now been able to apply for preliminary accreditation, which effectively "locked" their tariff level at the date they pre-accredited, giving them 6 or 12 months to get their plant up and running so that they could apply for full accreditation. This was intended to protect larger projects against degression, where tariff levels could fall every 3 months if a certain number of projects came on-line.

DECC are now consulting on removing pre-accreditation from the FIT scheme. This will mean that a developer will not be certain of the level of support they will receive under the scheme until the point at which Ofgem receives their application for (full) accreditation. According to the consultation, "DECC considers this to be an acceptable commercial risk for developers to take". Although investors and lenders currently tend to require pre-accreditation before approving financial close, DECC do not think that removing pre-accreditation will prevent projects being funded, although it acknowledges that funding may become more expensive. It is almost inevitable that this increased cost of capital will lead to a decrease in deployment levels, as some projects which would previously have gone ahead will now be considered marginal – or not economically viable.

There is a similar process, called pre-registration, for community groups and schools. The consultation also proposes removing this. But, we are told, DECC may consider re-introducing it as part of the FIT review which is taking place later this year, which seems somewhat bizarre.

In December 2014 DECC consulted on removing grandfathering support under the RO for future biomass conversion and co-firing projects. Along with the two new consultations detailed above, it today published its response to that December consultation.

Again this was prompted by pressure on the LCF and an unexpectedly high level of deployment of biomass under the RO. The delay in publishing the response (the consultation closed in January) is presumably because DECC were looking at the LCF as a whole across all eligible renewable technologies.

At the last RO banding review in December 2012, a number of new bands were created to support the full or partial conversion of coal-fired power stations to biomass. Renewables Obligation Certificates (ROCs) were awarded per unit, not per plant, as follows: 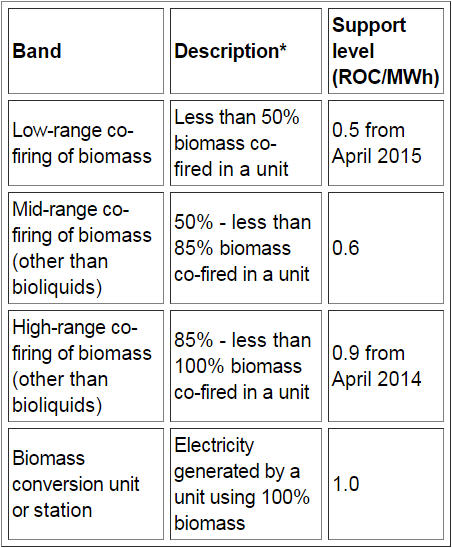 New biomass conversion and co-firing stations and combustion units will no longer receive grandfathering support. This is backdated to 12 December 2014, the date of the original consultation. There will also be no grandfathering support for units that are already receiving RO support and move for the first time into the mid-range or high-range co-firing of biomass bands, or into the biomass conversion band. They would not regain the benefit of grandfathering if they later move back down the biomass bands. There is much more helpful detail in the response document as to how this will work in practice.

The good news is that the changes to grandfathering do not apply to other biomass technologies as they deploy at a significantly smaller scale and so pose less risk to the LCF. So Energy from Waste, Advanced Conversion Technologies, Anaerobic Digestion, sewage gas, landfill gas, bioliquids (amongst others) are not affected by the changes.

There is also an exception for stations or units that have an Investment Contract awarded through the FID Enabling for Renewables process (i.e. the early form of Contract for Difference) and are awaiting state aid clearance at the time of the consultation. For these projects there is a grace period up to 31 March 2017 so that if they do not get state aid, they can terminate their FIDeR contract and still benefit from the RO and grandfathering.

There is also an exception for stations or units that had moved into the mid- or high-range co-firing band before 12 December 2014. They have until 12 December 2015 to move to full conversion and retain grandfathering at that band.

What seems clear is that DECC would prefer biomass plants to use the CfD regime rather than the RO. However, since co-firing of biomass is not eligible for support under the CfD, there is now a clear incentive on such plants to move as quickly as possible to full conversion as otherwise their level of RO support is no longer guaranteed.

We can expect a lot more announcements and policies emerging from DECC over the next few months, particularly in the Autumn. Things to look out for include:

It is clear from Amber Rudd's recent statement of DECC's priorities to the Energy and Climate Change Select Committee that cost control features large in DECC's thinking, possibly more than other priorities such as carbon reduction and security of supply. This is clearly not good news for the sector. However there are still opportunities for innovative technologies, not to mention untapped potential in renewable heat.