Smart Meters – the transition from SMETS1 to SMETS2

In an interview with LexisNexis, Associate Matt Nixon, explores the transition from first generation smart meters to second generation 'SMETS2' smart meters, as well as the ongoing challenges Great Britain's (GB) energy suppliers are facing as they roll out smart meters.

What are the differences between SMETS1 and SMETS2 meters?

Smart meters are intended to play a significant part in the transition to a low-carbon economy and the creation of an affordable, sustainable and secure energy supply chain – the smart meter rollout thus forms an important part of the government’s Industrial Strategy policy. To achieve the government’s smart metering ambitions, electricity suppliers are required by their supply licences to take all reasonable steps to roll out smart meters to all their domestic and small business customers by 31 December 2020.

A standard for the minimum common functionality of smart meters, known as SMETS1, was established in December 2012. SMETS1 meters provide for two-way communications between an energy supplier and their customers, enabling energy suppliers to provide smart services.

SMETS1 meters operate via data and communications infrastructure that is set up by individual energy suppliers (instead of operating through a single national data and communication system that is accessible to all suppliers). While the introduction of SMETS1 meters represented a notable advancement in metering technology by providing consumers with near real-time energy consumption information, the functionality of SMETS1 meters presents certain challenges upon consumers switching energy supplier (this switching of customers is referred to in the industry as 'churn').

When a consumer with a SMETS1 meter switches supplier, the consumer will lose smart services if the new supplier is incapable of accessing the previous supplier’s systems for communicating with the installed meter. In these circumstances, the relevant SMETS1 meter can no longer benefit from two-way communications, effectively rendering it a 'dumb' meter. 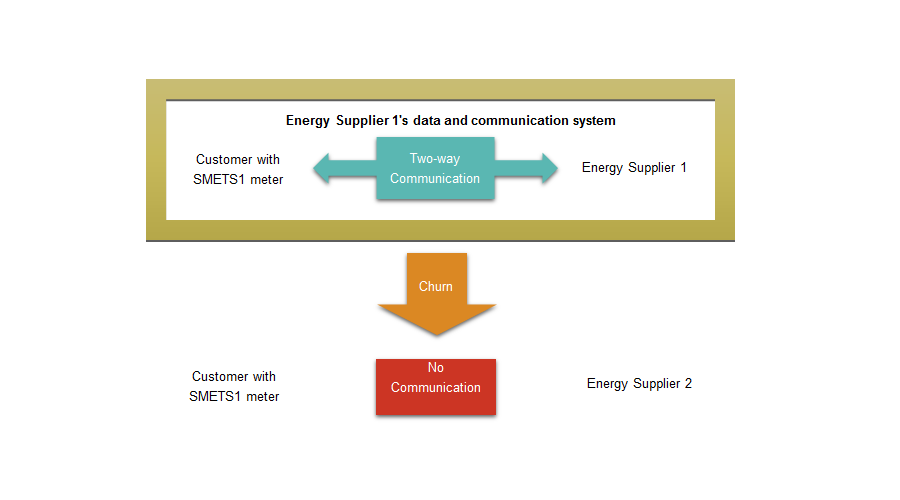 The fact that some consumers with SMETS1 meters cannot retain smart services after churn not only undermines the viability of a sustainable smart metering network, it acts as a disincentive for consumers to switch suppliers (irrespective of whether there are better deals available elsewhere). As you might expect, the government was extremely keen to develop the services and systems that could provide a data communications network through which all smart meters could function effectively (regardless of whether a consumer switches energy supplier).

To that end, in September 2013, the Department of Business, Energy and Industrial Strategy (BEIS) (formerly DECC) granted Smart DCC Ltd (DCC) a licence to establish and manage the data and communications network to connect smart meters to the business systems of energy suppliers.

In November 2016, the smart metering equipment technical specification for a second generation of meters (SMETS2) was enshrined in the Smart Energy Code. The DCC’s national data and communication infrastructure (which became operational in November 2016) is intended to operate consistently for all consumers that have SMETS2 meters, regardless of their energy supplier. This means that there will be no loss of communication when a consumer with a SMETS2 meter switches to a new supplier. 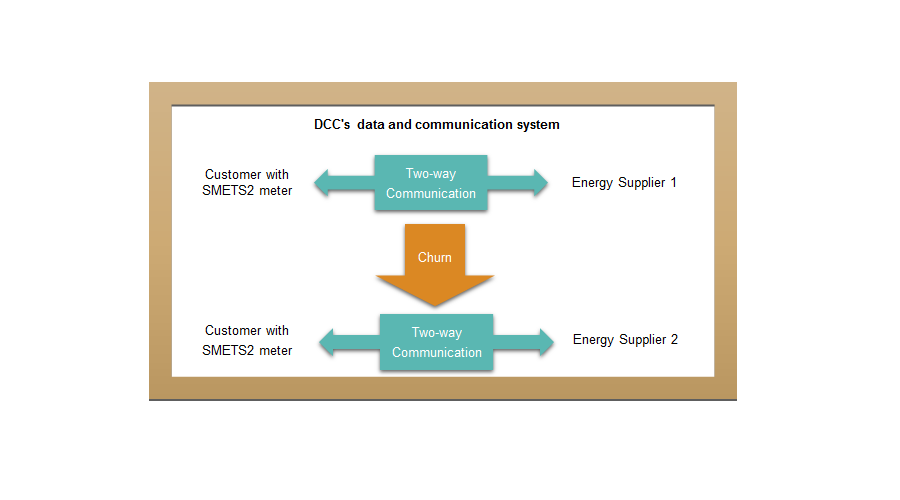 In April 2018, the government issued a consultation to ascertain the views of market participants (including energy suppliers, Meter Asset Providers (MAPS), network operators and trade bodies) on the timely enrolment of eligible SMETS1 meters in the DCC (government has proposed that enrolment eligibility will be determined with reference to the point in time at which device models are added to the Eligible Product Combinations list – ie a list of device model combinations in relation to which DCC has proven through testing its ability to process service requests). The consultation focused on maximising the interoperability of SMETS1 meters to overcome the challenges inherent with first generation smart meters (for example, ensuring that consumers with SMETS1 meters can retain smart services after they have switched suppliers).

The government responded to the consultation in October 2018 and, having taken into consideration respondents’ comments, it has proposed the introduction of the following energy supplier obligations:

All reasonable steps to enrol SMETS1 meters in the DCC

Energy suppliers will welcome the obligation to take all reasonable steps to enrol SMETS1 meters within a specified timeframe rather than, in the alternative, an obligation to replace such SMETS1 meters with SMETS2 devices within a similar period. The latter would likely cause significant operational disruption during the main installation phase of the rollout (eg insufficient installer capacity) and could expose suppliers to material and unnecessary costs (eg the payment of early termination charges to MAPs upon the removal of SMETS1 meters).

This proposal seeks to ensure that consumers will retain smart services upon churn (thereby encouraging consumers to take advantage of better deals in the market) and avoids the disruption for consumers associated with suppliers replacing installed SMETS1 meters with SMETS2 devices. Suppliers’ obligation to enrol eligible SMETS1 meters in the DCC also aims to:

If they haven’t done so already, energy suppliers should consider developing robust migration project plans that place substantial emphasis on testing and piloting their internal technical systems such that they are capable of migrating SMETS1 meters to the DCC at scale. The government considers a 12-month window from the point at which it is possible to enrol or from the point that an unenrolled meter is inherited (as applicable) provides suppliers with ample time to complete end-to-end testing.

BEIS has therefore tasked energy suppliers with delivering two competing objectives over the next two years: maximising the interoperability of eligible SMETS1 meters while simultaneously ramping up the deployment of SMETS2 meters.

The government has reinforced its view that all smart meters in domestic and small non-domestic premises should be operated through the DCC by the end of 2020. It has introduced a backstop date (31 December 2020) by which any unenrolled SMETS1 meters should be replaced by SMETS2 meters. Theoretically, consumers should therefore have an interoperable meter via enrolment or replacement by the end of 2020. As highlighted by respondents to the consultation, this proposal is very much contingent on DCC readiness to provide full operational and scalable services for both SMETS1 and SMETS2 meters.

Withdrawal of enrolled SMETS1 meters from the DCC

BEIS published a further consultation decision on 4 October 2018 which confirmed that, after 5 December 2018:

Interestingly, the government noted that its assessment of industry readiness (together with evidence in response to the consultation) shows that 'there are no industry-wide impediments to transitioning to SMETS2 meters'. Excepting a sudden volte-face in government policy, energy suppliers would be wise to proceed on the basis that the SMETS1 End Date and AMR Exception End Date are fixed and final. It is important that each supplier’s SMETS2 testing, piloting and rollout plans therefore cater for known (and unknown) impediments given that, after 5 December 2018, an energy supplier may find little sympathy with Ofgem should it be unable to deploy a SMETS2 solution.

Confidence in fixed end dates will no doubt allow market participants to better manage their procurement activities and resourcing planning however, energy suppliers may question whether such absolute deadlines recognise the operational and commercial challenges which they currently face (including, significantly, establishing secure, sustainable and SMETS-compliant supply chains).

While energy suppliers are making steady progress towards achieving their rollout obligations, with approximately 47,000 SMETS2 meters having been installed as at the end of September 2018, such progress has not been without its challenges.

Concerns over smart meters’ vulnerability to cyberattacks and the alleged health risks associated with radio wave emissions, together with the perceived inconvenience of the installation process, have meant that the public’s enthusiasm for smart meters has been somewhat subdued.

Energy suppliers must nevertheless demonstrate that they have taken 'all reasonable steps' to meet their rollout duty. For example, clear, intelligible and tailored customer engagement regarding the benefits of smart meters and, importantly, the ease and convenience with which suppliers can install smart meters at consumers’ premises, may go some way to satisfying such requirement. Energy suppliers must also develop operational practices (internally and in conjunction with third party installers) to deliver against such rhetoric.

Efforts in galvanising customers’ appetite for smart meters will be considerably undermined if energy suppliers are unable to establish secure, sustainable and SMETS-compliant supply chains. While suppliers may benefit from service level/service credit regimes in their meter supply contracts (or, if applicable, MAP contracts), any liquidated damages payable by manufacturers (or MAPs) for late or non-delivery of SMETS2-compliant meters may not sufficiently compensate the supplier for its downstream costs (eg idle installer workforce) or offset the regulatory risks to which energy suppliers will be exposed (eg failure to meet rollout duty).

Energy suppliers may choose to engage with multiple meter manufacturers so that they are not wholly dependent on any one supply arrangement. In addition, contractual levers can further mitigate the risks associated with late or non-delivery of meters (eg service credits, reduced volume commitments and termination rights).

Energy suppliers must compete to secure the services of a finite number of third party installers that are capable of installing and commissioning SMETS2 meters which interface with individual supplier’s specific IT infrastructure. The operational practices surrounding the installation and commissioning of SMETS2 meters are complex and, for many suppliers, are still undergoing testing and development.

Given that SMETS2 represents a 'new world' in metering, some energy suppliers are willing to enter into collaborative arrangements with installers in which the parties work closely to develop SMETS2 installation and commissioning processes. As such, it is not unusual for suppliers’ contracts with third party installers to include grace periods before SLAs will take effect (eg six or 12 months) to recognise that there may be teething problems outside of installers’ reasonable control, as suppliers begin to ramp up their SMETS2 installations.

MAPs will generally seek to de-risk their financial exposure under funding/rental contracts with energy suppliers – this reflects the fact that MAPs do not have a presence 'on the ground' and as such, consider themselves 'passive owners' of meters. For example, if a meter is lost, stolen, subject to hacking or damaged beyond repair, a MAP will generally charge the energy supplier an early termination charge ('ETC'). This charge effectively represents (on a net present value basis) the rentals that the MAP would otherwise have received had the meter remained on the wall for its assumed life.

It is then for energy suppliers to pass through their liabilities/obligations under their MAP contract to third parties that are better placed to bear such risks. To take one example, if a meter is lost by a supplier’s MOP between delivery and the scheduled installation date, it would seem reasonable for the MOP to indemnify a supplier for any resultant ETC that becomes payable by that supplier to the relevant MAP.

However, it is often challenging for suppliers to pass the full extent of such liabilities and obligations to its MOPs, MAMs or manufacturers (as applicable). Energy suppliers must therefore clearly identify the residual risks that sit with them so that they can seek to mitigate and manage such exposure throughout the term of its funding/rental contracts – eg via operational practices, closely monitoring counterparty performance, contractual controls and insurance cover.