On 16 March 2016 Nicola Shaw published her recommendations on the future shape and financing of Network Rail (Shaw Report).

Now that the dust has settled, and as the ORR embarks on its Periodic Review 2018 process where the regulatory recommendations will be played out (e.g. route based regulation), this article looks back at the principal conclusions of the Shaw Report and looks ahead to PR 2018.

The recommendations are shaped through the responses to her scoping document published in November which looked at the structure of Network Rail through three "lenses": customers, devolution and growth. The seven recommendations in the final report focus on these three key areas.

The Shaw Report team found that there are four core problems with the way infrastructure services are delivered by Network Rail today:

Based on these four problems, the report team identified four key objectives for its proposed programme of action:

The seven recommendations that the Report makes are designed to meet these objectives and address the problems. The Report team has worked closely with Network Rail, the Office of Rail and Road (ORR), the Department for Transport (DfT) and HM Treasury in refining and developing them. In her Foreword, Shaw stresses "There aren't any silver bullets here" and the Report takes a pragmatic approach, starting with an assumption that no structure can ever be perfect.

The Report goes into detail on each of the recommendations but this article can only summarise the main points. Please read the full Report for more detail.

1. Place the needs of passengers and freight shippers at the heart of rail infrastructure management

Although Network Rail's 'customers' are the train and freight operating companies, the consultation on the scoping document revealed that passengers and freight customers did not have enough of a say in how the railway was run – and they are the ultimate 'customers' of the rail service. Network Rail needs to become more customer focused. The Report recommends Network Rail set a six-monthly scorecard for each route that reports on progress against key deliverables. The deliverables would be set by the main TOCs and FOCs in each route, acting as a spokesperson for their own customers (by consulting with them first). The scorecard should also include a route-level profit and loss account that captures the finances of the whole industry, not just Network Rail.

2. Focus on the customer through deeper route devolution, supported by independent regulation

Network Rail is already divided into different routes, and the Report recommends this goes further, with greater devolved autonomy for the routes and the centre having 'system operator' functions (like capacity planning) and 'technical authority' functions (like setting high-level technical standards). The routes would be responsible for their own asset management, engineering works, minor enhancements, sale of access rights and timetabling, performance and property.

There should also be a virtual freight route (without geographic boundaries but with all the other devolved route functions) tasked with identifying opportunities for freight, acting as overall champion of freight and a single point of contact through which to arrange access for multiple routes.

Devolution to routes means that there needs to be a more decentralised form of regulation by the ORR, and the Report recommends that the ORR should, for the next Periodic Review, regulate Network Rail on a route level. This will mean each route has to publish full, separate regulatory accounts and be able to keep their own track access charges and single till income that they generate, and Network Rail's Regulatory Asset Base will be apportioned between the routes.

The Report also stresses that the ORR's role needs to be looked at, to ensure that it is focused on providing effective, independent regulation, with better tools to hold Network Rail to account for poor performance, and to lose its perception within the industry as Network Rail's customer. 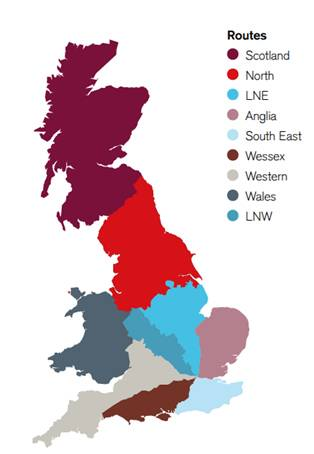 3. Create a route for the North

It is clear that Transport for the North (TfN) has engaged effectively with the Report and Shaw recommends that a new North route is created, covering TfN's region. This will give a greater incentive to improve performance on east-west lines, unlike the current London North West and London North East routes which split the region vertically in half. The proposed new route structure is shown in this map:

4. Clarify the government's role in the railway and in Network Rail

The Report points out that since privatisation, the government's involvement in the railway has been constantly changing and adjusting to events and it needs to have clarity about its various roles and objectives for the railway, and Network Rail in particular, if it is to have any hope of aligning its interventions with what it actually wants to achieve.

In particular, the DfT should set a long-term vision for the railway, with clear, deliverable priorities for the industry over the next 30 years. This should be based on the views of the National Infrastructure Commission, TOCs and FOCs, Network Rail, local government, the supply chain and end users.

The government's roles with respect to Network Rail (owner, funder, client for enhancements and operations, maintenance and renewals) should be updated and separated.

5. Plan the railway based on customer, passenger and freight needs

This recommendation follows the trajectory set out in the Bowe review. Customers and end users should be far more involved in planning and delivering future enhancements and where they are contributing funding, their role and degree of influence should reflect this. There should be a separate, independent body to co-ordinate and prioritise route enhancement plans; it should no longer be done by Network Rail.

The Report recommends that funding is linked to the prioritised enhancement plan in its entirety. There should be a move over time towards funding more route enhancements through devolved bodies such as TfN. The Report team would like to see routes encouraging more use of third party sources of funding, and the funder of any project should take on the role of project sponsor. Where possible, competition should be introduced to the planning and delivery of enhancements and the Rail Delivery Group have set up a working group to look into this further.

6. Explore new ways of paying for the growth in passengers and freight on the railway

To many people's relief, the Report does not, as was feared, recommend privatising Network Rail as a whole, instead focusing on funding and financing solutions for certain parts of the infrastructure manager, and for specific infrastructure projects.

Introducing private sector capital in parts of the infrastructure manager

The Report proposes a concession or time-limited licence for large sections of the network (e.g. a route or part of one). Wessex and Anglia are the strongest candidates because they have no or low levels of public subsidy and little forecast enhancement activity.

There would be a competitive tender resulting in an award to a private partner of exclusive rights to operate, maintain, renew and in some cases invest in the further enhancement of the assets for a fixed time period (typically 20-30 years). The concessionaire or licensee would pay an up front sum to the DfT in return for an income stream from the asset. This should be able to be treated as off-balance sheet as long as the concessionaire / licensee is a private sector institution, bears the majority of risk and reward, and is not, through contract or otherwise, deemed to be controlled by government or by Network Rail. There would need to be a public interest assessment before any asset goes to market.

The role of private sector capital in infrastructure projects

The Report also suggests that some projects could be funded by other parts of the public sector, such as local authorities, who can levy a 2p supplement on business rates to fund infrastructure, impose levies (community infrastructure levy and section 106 contributions) on developments, or borrow against their future revenues.

This is an areas where recommendations relating specifically to Network Rail are not sufficient; it is a problem in the rail industry as a whole. The Report team recommends that a group comprised of representatives from trade unions, the Rail Delivery Group, the Rail Supply Group, the Rail Safety and Standards Board and the National Skills Academy for Rail comes together and appoints someone to co-ordinate and drive a holistic approach to skills planning for the industry.

Implementation of recommendations: actions for Network Rail, the ORR and government

Work on implementing these recommendations needs to start immediately as the key structural recommendations (the new North route and further devolution of powers to routes with separate regulatory settlements and financial accounts) need to be in place for the beginning of control period six (CP6) in 2019.

Network Rail needs to develop an implementation plan within the next few months, building on the changes (such as devolving functions to routes) that are already being made. There will need to be regulatory and licence changes that the ORR will need to consult on. Network Rail and TfN will need to collaborate closely to create the new North route

The government will need to consider when and whether it wishes to pursue a concession or time-limited licence for a whole route. This would involve a number of stages, including a business case, public interest test, separation of the route into a separate legal entity, running it as a stand-alone business first, then taking it to market.

We are awaiting a response from both Network Rail and the Department for Transport. The Brexit referendum has slowed things down and as such it is not clear how much of the recommendations will ultimately receive Government support. That said, there is a feeling in parts of the industry that, whilst the review may lack a blockbuster recommendation, its evolutionary approach is more likely to succeed than more wholesale reform. On that basis, it may deliver where others have failed.

In the meantime, the ORR has commenced its CP6 Periodic Review process with the first major consultation published on 18 May 2016. Of particular note in the context of the Shaw Report's findings, PR18 will determine the regulatory framework that is to apply in the period when Rail North beds down, TftN makes it case for investment in Northern Powerhouse Rail amongst other things and both HS2 and Crossrail 2 come forward – a pivotal time for the industry and possibly the most intensive period of infrastructure enhancement for generations.

There is a huge amount in the melting pot. Key questions such as whether Network Rail routes should be financially autonomous, how far will route devolution go, how much contestability must there be in the industry will be debated and ultimately conclusions drawn which could have far-reaching consequences for the structure of the industry and set the baseline for future regulation for years to come. We will report on this in more detail in a follow-up article.