Transport for the North publish their report on a Northern transport strategy, as part of the Northern Powerhouse.

As noted in our article on the transport aspects of Budget 2015 the Department for Transport jointly with Transport for the North (TfN) published "The Northern Powerhouse One Agenda, One Economy, One North – A report on the Northern Transport Strategy" on 20 March setting out the strategic options for future transport investment in the north of England.

It is an ambitious strategy predicated on the basis that the cities of the North are stronger when working together to create a unified economic area that makes the most of existing skills and businesses and, importantly, attract new ones. The "agglomeration" effects rely on better connections both within city regions and journey to work areas and, crucially, to the rest of the UK and international hubs. If delivered, the prize is above (rather than below) trend growth for the North and a much healthier national economy less reliant on the overheating South.

Whilst questions inevitably remain about the availability of funding for the potential investments described and there is a good deal of optioneering to complete to identify the schemes that will ultimately be delivered, it is a positive step towards much needed improvement in transport in the North.

We summarise some of the key aspects of the strategy below.

The Northern Transport Strategy is part of the Government's "Northern Powerhouse" initiative being driven by George Osborne to rebalance the national economy so that the North of England complements and acts as a balance to the economic weight of London. Transport is a fundamental part of achieving this - particularly "connectivity" between the individual cities and towns in the North to allow them to function as a single economy so that they are stronger than the sum of their parts. It is clear that the areas of economic growth are seen as the cities and the strategy is all about connecting up the cities and making it easier for workers to get to and between them.

Importantly, the strategy is multi-modal and addresses both the needs of passengers and freight in a move to create a holistic approach to investment planning which is much needed. Admittedly, rail forms a large part of the plan but there are also proposals for improving the strategic road network and for developing a multi-modal freight strategy.

At the heart of the strategy lies the formation of Transport for the North – a single body to represent all stakeholders in the North and deliver the transport vision. It is the first significant step in what could be a remarkable journey.

TfN has a new vision for rail services across the North – TransNorth - designed to radically improve journey times and frequencies between the North's major cities through major investment in rail infrastructure. This investment will focus on improving east-west connectivity, building on the existing commitments to the Northern Hub and the electrification of the TransPennine line, together with improvements to the East Coast Main Line to Newcastle. The following diagram, reproduced from the strategy document, shows the journey times that TfN are aiming to deliver: 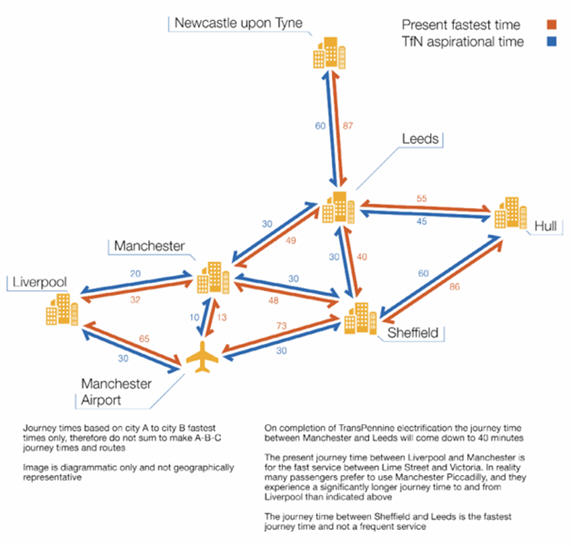 This will be complemented with an improved train service offering with new, more comfortable trains, extra seats and more frequent routes.

Network Rail have identified various options, ranging from radically upgrading existing routes to building completely new lines, which TfN will now consider. These include the option to create a new rail route across the Pennines from Manchester, linking into HS2 between Sheffield and Leeds; and the case for accelerating construction of the Sheffield to Leeds part of HS2 and the scope to use it for fast regional services linking Leeds and Sheffield.

TfN identify several problems with the road network in the North including:

The strategy lists the current road improvement works taking place in the region, such as the upgrade of the A1 to motorway all the way to Newcastle and the upgrade of the M62 to four lanes of smart motorway from Leeds to Manchester. It then goes on to set out TfN's work that will feed into the second roads investment period from 2020 to 2025, including exploring a major new road link under the Pennines between Sheffield and Manchester and a range of options for resolving congestion in the North West Quadrant of Manchester.

The strategy acknowledges that there has never been a single plan for freight and logistics across the North, so there has been a lack of cohesion in developing proposals across transport modes. The roads options identified above take account of freight movements but it is accepted that there will need to be a significant increase in rail paths in the future to support the increasing freight movements and warehousing capacity. This needs to anticipate longer trains (particularly for biomass) and look at the wider electrification programmes, including final mile access to terminals, to help greater use of electric traction.

TfN will work with the ports owners to take account of their expansion plans when developing the wider distribution network and will develop a Northern multi-modal freight and logistics strategy, to be published in 2016. This will include plans for warehousing, roads, rail, ports and other distribution networks.

TfN want to introduce a single smart ticketing solution that works on all modes of public transport right across the region. They would like an integrated Northern travel area based around clear geographical zones and a fair and simple fare structure. Given that there is no single authority responsible for all transport modes, TfN want to act as the co-ordinating lead on fare and ticketing issues with its own brand that passengers recognise and trust and which complements and works in collaboration with existing local transport authorities and operators.

To achieve all this, the strategy states that TfN will take immediate action to simplify rail fares across the North, reducing the number of regulated fares baskets, and start to draw up proposals for a fares structure for an integrated Northern travel area based on zones. They will align the different tickets and approaches in different cities and aim to trial contactless cards on transport systems.

The strategy recognises the importance of the region's airports, particularly Manchester which carries over 60% of air passengers in the North. However, it is less detailed when setting out how it will improve them, merely stating that it will develop plans to better connect Manchester airport to neighbouring cities by rail through the TransNorth network and nationally through HS2 and that individual city regions will work with Northern airports to develop plans for improved connectivity. The one concrete action is that Government will launch a review for regional airports affected by the recent devolution of Air Passenger Duty by Summer 2015.

The strategy is clear that the Northern Powerhouse needs good connections within city regions as well as between them. City regions will continue to identify and develop city-level transport schemes in longer-term strategies that extend significantly beyond the 2021 horizons of Strategic Economic Plans. The proposed step change from a roads perspective is that Highways England and local authorities will have a new relationship, with better co-ordination between local and strategic road networks and shared traffic information.

Transport for the North

Arguably, the establishment of TfN as a single delivery body is the most important aspect of the report.

If all goes to plan, TfN will establish a long term, strategic transport vision for the North that is shared by all stakeholders and crucially, allows them to speak with one voice and execute the vision. It would be difficult to over estimate the challenge faced by TfN but unified in this way, one can start to believe that decades of under investment will start to be reversed and the right decisions will be made in relation to what investment will bring the most benefit to the region and UK PLC. To date, TfN has been a partnership between Government, the Northern City Regions and LEPs, Highways England, Network Rail and HS2 Ltd. The plan is to review and agree the governance of TfN by Autumn 2015 and appoint an independent Chair which will enable TfN to act as a genuine representative body for the whole of the North of England.

Things will start to take shape in Spring 2015 when TfN will agree two new Memoranda of Understanding, one with Network Rail and HS2 Ltd and one with Highways England. These will set out how the parties will work together to agree and prioritise future options for investment.

The intention is that the Northern Transport Strategy will be regularly updated, initially in Spring 2016, with clear and prioritised transport investment opportunities, to inform national decision making for the next rail and road control periods for 2019-24. In other words, the period between now and Spring 2016 is key in determining which schemes will be taken forward and which do not make the cut.

From a funding perspective, all that is said is that the Government will look to make a multi-year commitment of funds to TfN, initially in the 2015 Spending Review.

And that is the one sour note – for all the strides that have been made in a short period from the initial Northern Powerhouse speech in Manchester in June 2014 to today, there remains no clarity on the fundamental questions of what funds are available for this huge programme of investment and precisely how decisions will be made on how that funding is deployed.

Having said that, this is a necessarily a journey that will not happen overnight. The key is to keep the momentum going through the election and beyond so that the future hinted at in this strategy becomes a reality.